The Pugalier may also be called a Pugilier or Puglier.

Pugaliers are the true clowns of the designer dog world. Willing and able to entertain just about anyone, these dogs live to be the life and entertainment of the party with their antics. One of the parents of the Pugalier is the Pug. The name “Pug” is believed to be derived from a Latin word which means fist. Many think that the name was associated with the Pug because their faces almost resemble a human fist. This is debated by some, however, and others state that “Pug” is also a nickname for a Monkey which Pugs also resemble because of their short faces. The Pug is small, usually between 25 – 35cm (10-14 inches) and weighing 6 – 9kg (13-20 pounds). Pugs are famous for being charming, playful, amiable and good-natured. While some are more playful, others are more proud and dignified, Pugs generally make good pets for families. They can be stubborn and lazy but they do not lack in love or affection for their human companions. Many describe them as being childlike.

The Pugalier is a designer dog, and therefore its appearance is not always solidified. The appearance of designer dogs often varies as a dog may more closely resemble either parent, and they do not always fall right in between them both. For the Pugalier there are certain goals which breeders try to achieve, the largest being to steer away from the health issues which are a result of the Pug’s short face. Due to the Pug’s facial structure they often suffer from breathing and eye problems. The Cavalier King Charles Spaniel has a larger muzzle than the Pug, so breeders attempt to produce a longer and healthier muzzle in the Pugalier. There is still some variability in this area, and some dogs still have shorter muzzles than others. 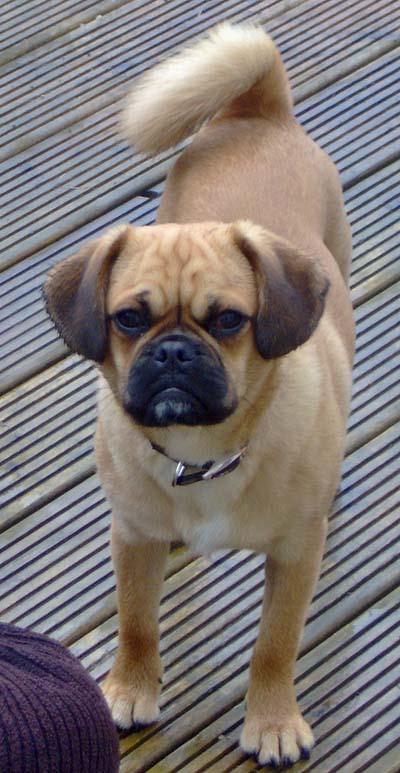 Nevertheless, most Pugaliers will have a slightly longer face than their Pug parent, thus reducing the risks of a lot of these famous health issues. Many Pugaliers are larger than an average Pug. A Pugalier can range in weight from 6 – 10kg (13-22 pounds), and stand anywhere from 28 – 35cm (11-14 inches) in height. The Pugalier has a unique appearance that is all its own, even though it can often vary. For the most part, however, Pugaliers have a few general things in common. The round shape of the skull and body length usually take somewhat after the Cavalier King Charles Spaniel. Pugaliers will also have slightly longer ears than Pugs because of the Charles Spaniel genetic influence. Of course, they will have muzzles that are somewhere in length between Pug and Cavalier King Charles Spaniel. The coat of a Pugalier is almost always short exactly like their Pug parent, but there are some exceptions when a Pugalier is born with a slightly longer coat. They sometimes appear in the fawn and black colors of the Pug. They may also be tan or black, and some have white markings. The personality of designer dogs is sometimes unpredictable like their appearance—they could favor one parent more than the other. Because the Pug and Cavalier King Charles Spaniel are both affectionate, loving, and gentle breeds, the Pugalier makes a wonderful companion dog with a gentle disposition and sweet nature. There are significantly few temperamental issues found in either parent breed so the Pugalier often has a golden personality. They do well in family setups with children and they also get along with other animals and pets.

Pugaliers are easy-going, inquisitive, and outgoing. If you are concerned about the temperament of a dog, it would be almost impossible to go wrong with a Pugalier. They are very friendly and gentle dogs. They are not suitable as guard dogs and some may make poor watch dogs, but they will make for excellent companions and pets. Most Pugaliers are devoted and loyal to their families and they adore spending time with them as much as possible. They make for fairly good lap dogs because of their size.

Are Pugaliers a healthy breed? The Pugalier is bred to be a healthier dog without the skin, eye, and breathing problems evidenced in the Pug. Although the Pugalier is overall likely to be healthier than the Pug, some Pugaliers who resemble their Pug parent will still risk inheriting the same facial problems. Wrinkled skin can lead to infections, protruding eyes are vulnerable to certain health conditions, and short muzzles make them vulnerable to breathing problems. The Cavalier King Charles Spaniel is prone to heart issues, congenital eye defects, and slipping knee caps, which are not seen in nearly as many Pugaliers.

How long do Pugaliers live for?

Pugaliers are expected to live anywhere from 9-14 years depending on their weight and activity level.

How much exercise does a Pugalier need?

While some Pugaliers may take after the Pug and prove to be somewhat lazy, Pugaliers are often fairly active. In either case, it is a good idea to make sure they get a healthy level of exercise every day. If they are outside it is important to make sure they don’t over-exert themselves and are not too long in the heat or cold, especially if they have a shorter muzzle. Make sure they have enough water as well. Many Pugaliers are well suited for an apartment lifestyle if given regular exercise.

How much grooming do Pugaliers need?

Pugaliers need relatively little grooming, and brushing them once a week while watching TV is usually sufficient. They may need more brushing if they are shedding very heavily or if they happen to have a longer coat. Their eyes and ears should be checked to make sure they are clean and dry. If they have a wrinkled face it is important to clean the creases with a damp towel to remove any excess gunk that may build up in the creases.