The Labradoodle is a well-known crossbreed between the Labrador Retriever and a Poodle. What is less well known is that many Labradoodles will also have other breeds such as Golden Retriever or Cocker Spaniel in their background. This was done in the early days of the Australian Labradoodle breeding program in order to get the best genetic influence to develop this wonderful designer breed.

Labrador Retrievers are commonly known as simply Labradors or even just Labs. They are a very popular breed of dog commonly seen all over the world. As a larger breed of dog males typically stand at 29 – 37kg (65-80 pounds) and 22-25 inches in height. Females are 25 – 32kg (55-70 pounds) and 21.5-22 inches. They can be black, yellow, or chocolate, and have short coats. They are popular for their friendly, outgoing temperaments. They do very well as family dogs and get along well with other animals and children of all ages. They are even-tempered, patient, and sweet. Many Labs are working dogs for the disabled or serve as military canines.

There are various different sizes of Poodles, from the large to the extremely small. Most Labradoodles are generally bred using a slightly larger Poodle, but whether or not the Poodle is a Medium, Miniature, or Standard will result in the size of the Labradoodle. Apart from size Poodles are generally the same in overall appearance and temperament, but small Poodles were bred to be companions and lap dogs and larger Poodles were once working dogs. They are best known for their ultra-curly coat, slender, muscular bodies, long muzzles, floppy ears, and great sense of intelligence. Poodles require both physical and mental stimulation due to their sharp bodies and minds. They are very trainable and do quite well in obedience training. Standard and Miniature Poodles do the best around small children and families as they are not as fragile as their smaller counterparts.

Like all other designer dogs it is important to note that the Labradoodle’s appearance may vary from dog to dog. Labradoodles that are bred with other Labradoodles over multiple generations will have a slightly more consistent appearance as opposed to first-generation Labradoodles. The same statement is also true about sizes, but in general the Poodle parent will give the best indication as to the overall size of the dog. 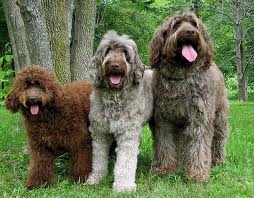 In general the Labradoodle’s body will be athletic, rather square in shape, and graceful. Because both Labs and Poodles have ears that are folded on the sides of their heads the Labradoodle will have this same feature. Their muzzles will be mid-to-long. Essentially a Labradoodle may have one of three distinct coats: Fleece, wool, or Labrador/hair coat. A fleece coat is very soft, relatively long, and wavy and is classed as a low to non-shedding coat, as is the wool coat that is made up of tight curls primarily resembling a Poodle.

The Labrador/hair coat mostly resembles the Lab parent and is generally straight or slightly wavy and will shed. Depending on what generation the Labradoodle is, will have a fair amount of influence on the given coat type. First generation Labradoodles will often have a hair coat. Labradoodles may also come in a range of colors, either in solid coats or in a mixture of colors. These colors include cream, chalk, apricot, gold, blue, lavender, parchment, red, silver, cafe, chocolate, caramel, chocolate, and black.

The Poodle/Labrador combination of the Labradoodle makes for a generally fantastic personality in a dog. Poodles are well-known to be one of the most intelligent breeds of dogs, and Labradors are especially known for their sweet-dispositions and friendly attitudes. Generally a Labradoodle will be cheerful, affectionate, kind, loyal, intelligent, social, and level-headed. Neither Poodles nor Labradors are suitable guard dogs, so that is definitely not likely for a Labradoodle, but the plus side is that they are usually very friendly around everyone—strangers, children, and other animals. Their unique temperament also makes them a good choice for a service dog.

Poodles are very trainable, gentle, and intelligent, and Labs are energetic, outgoing, and kind. Not every Labradoodle will have exactly the same personality, but if they are bought from a reliable breeder and from good parents, and then trained well, the Labradoodle is a great companion for virtually anyone. Some Labradoodles may be shy, skittish, or sensitive if they take on the slightly more negative characteristics of the Poodle, but generally the Labrador influence will even things out.

With any designer dog it is impossible to know for certain how the temperament, as with the appearance, will come out. Some sources say that buying a Labradoodle which was bred from a line of Labradoodles will be much more predictable in both appearance and personality than a first generation Labradoodle from Poodle and Labrador parents. It is, however, likely for a Labradoodle to be excitable to the point of jumping or getting into trouble with other less-socialized dogs that are not used to the Labradoodle’s tendency to be a little overwhelming. As with any dog it is always prudent to train and socialize them early on to curb them of any bad habits or behavioral problems.

Are Labradoodles a healthy breed?

Most Labradoodles will be generally healthier than their parent purebreds, but they can inherit health problems that can crop up in either parent breeds. Some of the health concerns that are sometimes seen in Labradoodles are ear infections, Progressive Retinal Atrophy (PRA), hip and elbow dysplasia, hypothyroidism, epilepsy and allergies.

How long do Labradoodles live for?

A Labradoodle has a life expectancy of 10-15 years with the smaller dogs generally living longer than their larger relatives.

How much exercise does a Labradoodle need?

Labradoodles are fairly active dogs because both parent breeds are relatively active. They will require a fair amount of regular exercise. This can include regular walks or play in the yard. The Labradoodle does learn to retrieve very quickly, so playing fetch will tire out the dog with little effort on the part of the owner. It is just as important to exercise their minds through training as it is through physical activity. An unstimulated Labradoodle may execute unwanted behaviors in an attempt to get attention.

How much grooming do Labradoodles need?

Part of grooming a Labradoodle will depend on the type of coat they have. A wool coat will need regular brushing and it is easier to take care of if the coat is kept relatively short. Fleece coats are often the most desirable because they are the softest, and although it needs brushed it doesn’t need as much care as a wool coat. Hair coats need little attention but they will shed.