The Cavoodle may also be called a Cavadoodle or Cavapoo.

The term “man’s best friend” is often applied to dogs but when talking about Cavoodles the phrase should be modified slightly to “everyone’s’ best friend,” as the Cavoodle is such a friendly and loving breed that it gets along well with everybody.

The Cavoodle’s parent breeds include the Cavalier King Charles Spaniel and either a Toy or Miniature Poodle.

Toy Poodles are the smaller of the two and this is often very confusing for people new to Poodles. They vary in height and weight but are usually under 29 cm in height and weigh between 2-5kg. Miniature Poodles stand between 28 and 40cm (11-16 inches) in height and weigh between 12 – 14kgs. They resemble their larger Poodle counterparts, are square in structure, and come in an array of colors including silvery, gray, black, blue, apricot, red, white, and a host of other solid or broken colors. Their coats are generally either curly or corded, and they make very great companion and lap dogs. They are extremely intelligent, trainable, and they enjoy entertaining their families.

The toy and the mini Poodle are essentially the same breed with the toy being smaller, but show breeders have divided the breed into 2 size classes over time and they consider the 2 sizes as separate breeds. It is commonly believed that the Toy and Miniature Poodles are the descendants of the older breed of Standard Poodle. These two types of Poodles share most physical and personality characteristics except for the difference in size. The name “Pudel” is of European origin and suggests the meaning of “one who plays with water.” If a Miniature Poodle is to be shown it will need much more extensive grooming than if it is just a companion dog. Generally they do not need too much care as just pets. A few popular show clips include the “lamb clip,” “pet clip,” and the “puppy clip.” Like other Spaniels, the Cavalier King Charles Spaniel is known to be playful, sociable, and affectionate. Small Spaniels have existed for a very long time–centuries in fact. Various parts of Europe and the royalty there seemed enthralled by the little dogs, often depicting them in paintings, but the Cavalier King Charles Spaniel or English Toy Spaniel specifically didn’t appear on the scene until the early 20th century. The Cavoodle is essentially the same size as its parents, often favoring the Cavalier King Charles Spaniel and their petiteness. The height of a Cavoodle will vary depending whether the Poodle parent is a Toy or Miniature. A Toy Cavoodle is typically between 28 – 34cm in height, the Mini Cavoodle averaging 33 – 42cm tall. Because of the characteristics intrinsic in the Cavoodle it is not uncommon for them to retain a puppy-like appearance well into adulthood. Most possess a round face, large brown eyes, and floppy puppy ears. Their bodies are short and strong with dark eyes and facial features. The neck and tail are moderately long, generally, and the wide-set ears often hang long.

It is very important to note that a Cavoodle is a designer dog, and like all such dogs, their appearance can be somewhat less predictable and varied when compared to their purebred parents. Cavalier King Charles Spaniels and Miniature Poodles are two very distinctive breeds possessing quite different physical qualities. This means that some Cavoodles will look more like Miniature Poodles but others may look more like Cavalier King Charles Spaniels. However, first generation Cavoodles tend to look the most similar to each other when compared to Cavoodles of multiple generations. There is no breed standard for the dog due to the fact that they are a designer breed.

The coat is the most distinctive interred physical trait of the Cavoodle. Because the Miniature Poodle and the Cavalier King Charles Spaniel both have similarly luxurious coats, the Cavoodle is almost guaranteed to have a luxury coat as well. It may be either feathered or curly. Most Cavoodles will have a low to non-shedding coat but sometimes a puppy with a hair coat that will shed will be born. A Cavoodle may be solid white, gold, black, chestnut and white, or tan, black, and white together.

Above almost anything else the Cavoodle is known for being gentle in its nature. Both the Miniature Poodle and the Cavalier King Charles Spaniel are intrinsically sociable and easy going. There are many positive temperamental qualities shared by both parents of the Cavoodle. The Cavalier King Charles Spaniel is usually quite patient and gentle around children, and most Cavoodles have inherited this characteristic. Cavoodles are brave and patient.

Most Cavoodles are devoted to their families and prefer human attention and interaction to animal. This is often evident in the hours a Cavoodle will spend playing with children without seeming to tire of the children’s antics. Although Cavoodles are generally highly intelligent, you must remember that they have one parent that is a Poodle, so will need a healthy amount of positive reinforcement. Cavoodles learn quickly, both wanted and unwanted behaviours, so the job of the owner is to show their dog what behaviour is acceptable and which are not.

Are Cavoodles a healthy breed? Most Cavoodles are healthy dogs. The Cavaleir King Charles Spaniel does have problems associated with its short muzzle, heart and eyes to name a few but the addition of Poodle genetics usually keeps Cavoodles from developing these issues. Both Cavaliers and Poodles share an inherited eye disorder known as Progressive Retinal Atrophy (PRA). It is highly recommended that the puppy you are looking to buy has had one parent DNA tested and found to be clear of this blinding disorder before purchasing. The link below has a great video explaining what PRA is.

What is PRA in dogs?

Obesity is also a common problem in dogs these days, so it is a good idea to keep this breed—like any—lean, by feeding a healthy and sufficient diet along with enough exercise to keep your Cavoodle happy and healthy. Routine veterinary checks are also pertinent in keeping any dog healthy.

How long do Cavoodles live for?

The typical lifespan of a Cavoodle ranges between 11 -15 years. This said, you want your dog to live a healthy as well as long life, so looking after their health throughout their life is vitally important.

How much grooming do Cavoodles need? 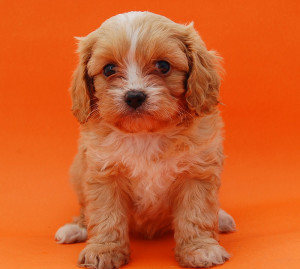 The Cavoodle will likely need to be clipped routinely, as all non-shedding dog’s hair never stops growing. Grooming also depends heavily on the desired length that the owner wants to keep on their Cavoodle. If you want to maintain a very short coat then more clipping is needed to keep it short. Cavoodles with longer hair, or a style like that typically seen on a Poodle it will require slightly more brushing than Cavoodles with a shorter coat.

How much exercise does a Cavoodle need?

Cavoodles are highly adaptable to a range of living arrangements. A Cavoodle is well suited to a big house with a family or in a small apartment without a yard. Generally they are more active and energetic than Cavalier King Charles Spaniels, but the Cavoodle, like most small dogs, does not require excessive exercise. A walk is all they generally need, especially if they live in a small apartment, but usually they will keep themselves entertained and exercised in a normal suburban backyard. All dogs love to get out for a walk to keep them mentally stimulated when they get the chance.