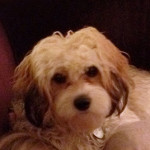 These little dogs make great companions, but they do require more exercise than many new owners realise thanks to the influence of the Bichon Frise.

The two parent breeds for the Cavachon are the Bichon Frise and the Cavalier King Charles Spaniel. 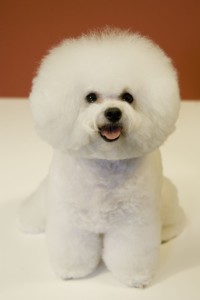 Bichon Frise means, essentially, curly lap dog. They belong to the Toy Dog group and thus weigh 5 – 9kg (10-20 pounds) and stand at a height of 23 – 30cm (9-12 inches). They have slightly rounded skulls, curly tails, and black noses. Their coats generally resemble that of a Poodle, as they are curly and virtually don’t shed. Most Bichon Frise are white, but rarely, may be apricot or gray, with possible buff, apricot, and cream coloration around the paws, ears, snout, or body. Bichon Frise are most commonly described as being affectionate, gentle, sensitive, cheerful, playful, and feisty. They generally make good family dogs and get along well with children and other animals. They may be territorial and some Bichon Frise are difficult to housebreak, shy, and/or suffer from separation anxiety if left alone. The Bichon Frise is a companion dog and makes a good watch dog. Their coats are of medium length and silky in texture. They may be black and tan, tricolor, ruby, or blenheim. The Cavalier King Charles Spaniel is frequently described as being affectionate, sociable, adaptable, patient, fearless, and playful. They are lively, intelligent, and love to please their masters. They are generally peaceful, easy to train, and get along well with everyone. Some Cavalier King Charles Spaniels may have strong herding instincts and suffer from separation anxiety and shyness. The downside to the Cavaliers are their numerous health issues. The particular hybrid of the Cavachon dog is sometimes described as having a teddy-bear-like appearance. There is, as of yet, no recognized breed standard for the description of the dog as they are relatively new and not as popular as purebreds which have an existing standard. The other thing about the Cavachon which makes it difficult to have a standard is that this type of dog, being a designer dog—a blend between two purebreds—does not have an identical appearance between individuals. It is a matter of which genes come out more strongly that determines which parent, if either, the dog more closely represents. This is difficult to determine and often times random, but they are certain to have some mixture of Bichon Frise and Cavalier King Charles Spaniel characteristics.

As their parents are both toy breeds, it is a guarantee that the Cavachon will be small dog as well. They generally weight 5 – 9kg (10-20 pounds) and stand approximately 30 – 33cm (12-13 inches) tall at the shoulder. They have an appearance that is described as being sporty, and their eyes are expressive, large, and sweet. Both parents are often described as having rather dramatic eyes, so the Cavachon often does as well. In most cases the Cavachon closely resembles the Cavoodle, but they have shorter and more rounded muzzles and do not have the same size variation available in the Cavoodle.

The ears of a Cavachon are long and floppy, like their parents. Their coat often makes them popular breeds for families who suffer from dog-allergies. The coat varies somewhat from dog to dog, and may be wavy or curly, but it is generally silky in texture and fluffy and thick. They have a dense, soft undercoat. White is the most common color for the Cavachon, but they may also come in many other color combinations. They may be solid peach, blenheim, tri-color, apricot, sable, red, or black and tan. The combination between Cavalier King Charles Spaniel and Bichon Frise is bound to produce a dog which is non-aggressive and in general tolerant, gentle, and accepting. The temperament of the Cavachon is frequently described as being social, outgoing, friendly, affectionate, loving, cheerful, and lively. The Cavachon is said to be a suitable dog for families with children and other pets, as they tend to get along well and be relatively patient and accepting of people and animals alike. They tend to, in general, be able to withstand a lot from children. Many small dogs are, nevertheless, vulnerable, and if hurt or provoked to a point may still growl or bite.

They have loving personalities and need to have attention and companionship. They are people-oriented dogs and form close connections with their families. The Cavachon is known to be a fairly intelligent breed of dog, and also quite easy to train. Consistency is key to training a Cavachon, and it is also important to begin training at a relatively early age. The earlier a puppy is introduced to training and socialization the better, and essentially the results will also be better. This is very important in households with other pet animals as some Cavachons will instinctively chase small pets such as cats, rabbits and guinea pigs. Their eager-to-please nature makes them much easier to train than many other dog breeds, and many owners have described the training process as being enjoyable. Cavachons tend to be vocal and frequently make good watch dogs, but they are not always dependable in this area. They are not bred to specifically be either guard dogs or watch dogs but rather companion dogs. Although a Cavachon may inherit the negative attributes of either or both parents, the Bichon Frise/Charles Spaniel combination generally makes for dogs with desirable temperaments.

Are Cavachons a healthy breed?

A Cavachon may inherit any of the health problems of either parent, but generally they are healthier than a purebred. They are especially susceptible to ear infections because of long hair inside their ears that retain a more humid environment. They may also have problems with immune diseases, epilepsy, Progressive Retinal Atrophy (PRA), liver shunts, heart murmurs, and flea allergies.

How long do Cavachons live for?

The typical life expectancy of a Cavachon is 10-15 years.

How much exercise do Cavachons need?

It is important that all dogs have some degree of exercise, but the Cavachon does not require constant energy burning activities like a working dog would need. They are not generally hyperactive, but if left alone all day they will need an outlet for any pent up energy. Moderate, daily exercise is generally sufficient to keep them both healthy and well-behaved. This could be achieved with a long walk at a brisk pace or by a daily play with other dogs in the park for an hour or so.

How much grooming do Cavachons need?

When caring for a Cavachon it is especially important to clean and monitor their ears to prevent infection. They should be combed every few days and they will also need to be clipped and bathed every month or two.