The Moodle has other names, such as Maltipoo, Malti-Poo, Maltapoo, Maltepoo, and Maltese-Poodle.

Favoured by celebrities and families alike, Moodles are second only to Cavoodles for a small, non-shedding breed with plenty of character and charm. The Moodle is a mix between the Toy Poodle and the Maltese. The Maltese is a Toy dog as well and one of the smallest breeds. They typically weigh between 2 – 4kg (4-8 pounds) and stand between 18 – 30cm (7-12 inches), and of course, females are generally smaller and lighter. The height is generally equal to the length of their compact bodies. They have a single relatively long coat that is of a silky texture. In every case the Maltese has a white coat, but sometimes it may have lemon or biscuit coloured markings. Maltese are playful, affectionate, lively lap dogs and companions. Not all Maltese are suitable in families with small children, especially if the children are not respectful of animals, and some may also suffer from separation anxiety. Although they are active the small size of the Maltese makes them suitable for apartment living. Like the Maltese, the Toy Poodle is about the same length as it is tall. The Toy Poodle, like the Maltese, is also very small. They do not exceed 30cm in height and weigh under 4.5kg (10 pounds). They have a level topline and a tail which is set high as well as carried high, but sometimes docked to half its length in countries that allow tail docking. They come in a range of colors, unlike the Maltese. A Toy Poodle might be white, cream, silver, gray, brown, black, red, or apricot. They are intelligent, responsive, and lively. They may have certain behavior problems, but, if they are socialized, trained, and given enough exercise they are generally good dogs. Toy Poodles often make good watch dogs because of their tendency to be vocal. They are quite peaceful and generally affectionate, making wonderful companions. A Moodle may look like any combination of either parent because they are a designer dog. Designer dogs sometimes look more like one parent than the other. The Moodle might be a bit different than other designer dogs, however, because the Toy Poodle and the Maltese already share so many common physical characteristics. Like both of its parents, the Moodle is a small breed of dog, making them perfect as lap warmers. A Moodle may be slightly larger if its Poodle parent is a Miniature Poodle instead of a Toy Poodle, but generally the size range is 3 – 8kg and 25 – 35cm.

The physical characteristics of the Moodle will be small, petite, but still more robust than the toy Poodle thanks to the influence of it’s Maltese parent. This specific crossbreed generally produces dogs which have both puppy-like appearance and features, even into adulthood. They have small, floppy ears and somewhat long muzzles. The nose of a Maltese will get lighter when it isn’t in the sunlight much, turning it light brown, but it will go back to being black if exposed to the sun again. This may be true of some Moodles who don’t get a lot of direct sun. There are several different possibilities when it comes to the Moodle’s coat, as the Maltese and Toy Poodle have slightly different coats. It is generally semi-long and may be either silky/soft, curly/thick, or wavy/wiry. Good breeders do not often produce the wiry coat as it is not very desirable. Because the Maltese is always white, the Moodle’s colour will be influenced by it’s Poodle parent. In general a Moodle may be any of the colors of the Toy Poodle and that parent will play the most important role in the colour of the dog. The Moodle makes for a pet that is playful, loyal, friendly, and affectionate. They are definitely not guard dogs as they are much too small and delicate, but some are somewhat good watch dogs because they have a tendency to bark at strangers and unusual noises. A lot of this will depend on the individual dog. The Moodle is comfortable living in an apartment home or a bigger home, as ultimately, they are bred to be companions so will follow their owners if they are indoors or outdoors. They typically do fairly well in a family setting with older or well behaved children, as the Moodle is more fragile than other similar designer breeds such as the Cavoodle. Moodles also frequently get along well with other pets such as other dogs and cats but it is important to train and socialize them at an early age. Both the Toy Poodle and the Maltese can have temperamental problems. The Toy Poodle can be high-strung, prone to barking, timid or skittish, and they may also be very sensitive to loud noises and stress. The Maltese is somewhat similar.

They are prone to separation anxiety and may be difficult to house break. Of course, the Moodle may develop any of these behavioral problems, but with early training and socializing with other people and animals a lot of these issues may be avoided. The other good news is that the Moodle, unlike the Maltese, is easier to housebreak and train. Moodles make for small lap dogs that are lively, cute, and loving.

Are Moodles a healthy breed? White shaker syndrome is one possible condition a Moodle may have. It is common in small pure white dogs—so it is prevalent among the Maltese. A white Moodle with a white Toy Poodle parent will be susceptible to this problem. It is also important to be careful with a Moodle’s throat or they may suffer from a collapsed trachea. Other potential problems include progressive retinal atrophy (PRA), dental issues and luxating patella. Good breeders will have their dogs tested by their vet for luxating patella before breeding and will DNA screen the Poodle parent for PRA also. The Moodle is likely to be healthier than either of it’s purebred parents.

How long do Moodles live for?

Most Moodles will live to between 13-15 years of age, with some living well beyond this.

How much exercise does a Moodle need? 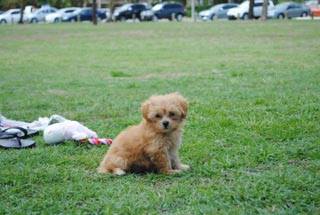 The Moodle will not need an excessive amount of exercise and in fact should avoid strenuous activity while growing up. It is healthy for them to have play time or a daily walk. Having some exercise can keep them physically and psychologically happy and healthy. It is important to watch them if they are outside the yard or in a dog park to avoid them getting themselves into trouble.

How much grooming do Moodles need?

Bathing should be done approximately every three to four weeks, but not more frequently or their skin may become dry. To avoid dental problems brush their teeth daily or provide raw beef bones for them to chew. Small dogs are notorious for dental issues due to the reluctance by many owners to offer bones on a regular basis. They should also be combed daily to avoid tangles and their ears should and eyes should be checked regularly.