Stop Your Puppy Jumping Up On You

Most dog owners are puzzled as to why their dog jumps up but if we look at dogs as pack animals whose ancestors lived in the wild we know that puppies would greet an adult by licking their muzzle, as it was a signal for the adult dog to regurgitate food. Domestic dogs no longer (or rarely) do this for their pups but the muzzle licking has survived as an instinctual behaviour. Of course, humans don’t exactly have muzzles but puppies will still try to jump up and lick our faces – which is the closest thing to a muzzle in their eyes. 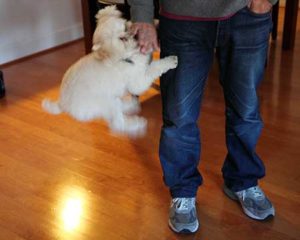 When the puppy is small and cute humans will say “oh, how adorable,” when the pup jumps up and licks their face, and just like that the puppy has now received his reward for a new learned behaviour. However, small and cute only lasts so long because once the dog is 12 months old he is ruining clothes with muddy paws, and bowling old ladies over with his rambunctious jumping. This is especially important in smaller breeds like Poochons that seem to get away with murder!

Start early when your new puppy comes home. Only pay attention to them when all four paws are firmly planted on the ground. For this to work everybody in the household needs to follow the rules. Visitors will be a cause for frustration when they inadvertently provide positive reinforcement because they don’t really mind the dog jumping up, but it’s important that you let them know what you are trying to do in not letting the dog jump up to greet people.

Avoid paying attention to the dog until they settle down. They will eventually learn to greet you in a calm and controlled manner whenever you arrive home. If she does jump up ignore her by turning your back to her and not pay her any attention at all. When she does settle down reward the behaviour with a pat and some praise, but keep it calm so they don’t get too excited again. This may take a few repeated attempts but after a while she will start to associate jumping up with being ignored and will stop the behaviour.

Many owners have had success by using a command to distract the dog from jumping up. When the dog jumps up on you turn your back on her but keep her visible in the corner of your eye and command her to sit. When she does so be sure to lavish her with praise. If she proves to be too excitable to notice the command keep on ignoring her until she quiets down and then try the command again. When she finally does sit praise and treat her to reinforce the behaviour. After a while your dog will soon learn that following your command is what will get her the reward, rather than the jumping.